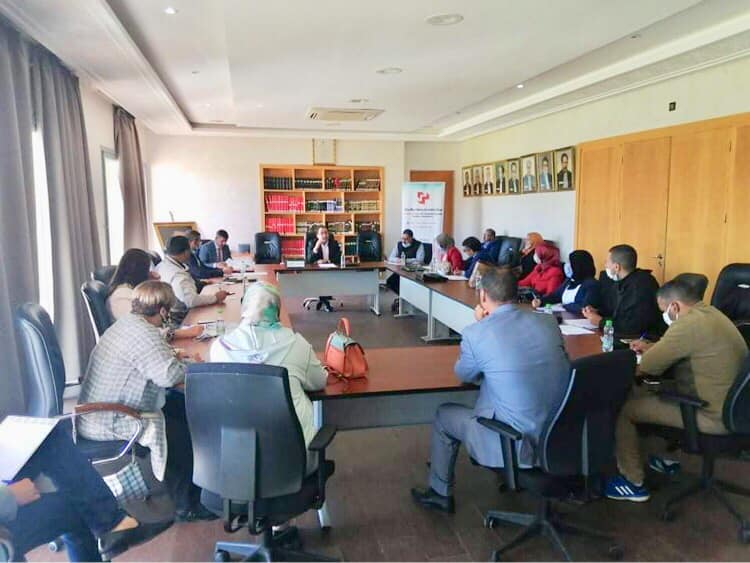 A General Report on the Training Course:

Takamul Center for Studies and Research, in corporation with Hanns Seidel, the German Institute, and the Young Lawyers Union of Marrakech, has organized a training course on “contending the unconstitutionality of laws and their role in protecting rights and freedoms” which was held on 7 November, 2020 in Marrakech.

The opening session was headed by representatives from Takamul Center for Studies and Research, the German Foundation, Hans Seidel, and the President of the Young Lawyers Union.

Dr. Mohammed Atrkin began the first session, speaking on the important role of both the judge and lawyer in the process of arguing the unconstitutionality of a law.

He also provided international comparisons on this issue, including information from both Spain and France.

In the evening, all activities were combine into two workshops:

The first was instructed by Dr. Abderrahim Elaalam who discussed procedures for arguing the unconstitutionality of Moroccan laws, and presented comparative experiences from the United States of America. Elaalam ended the workshop by examining a group of legal texts as potential examples of unconstitutional cases.

The second workshop was provided by Dr. Ahmed Hadrani covering the same topic of proper procedure for arguing an unconstitutional law. The discussion focused on a specific example, the death penalty in Morocco, and the ways it can be argued as unconstitutional.

At the end of the training, this set of recommendations were formulated:

Contending the unconstitutionality of laws should not only include legislative texts, but also a memorandum along with administrative discussion.

Enabling the Constitutional Court to contract with judicial assistants in order to ensure that work on such cases is not delayed.

Continually holding training sessions for lawyers to sty informed on the issues of contending the unconstitutionality of laws and their role in protecting rights and freedoms.