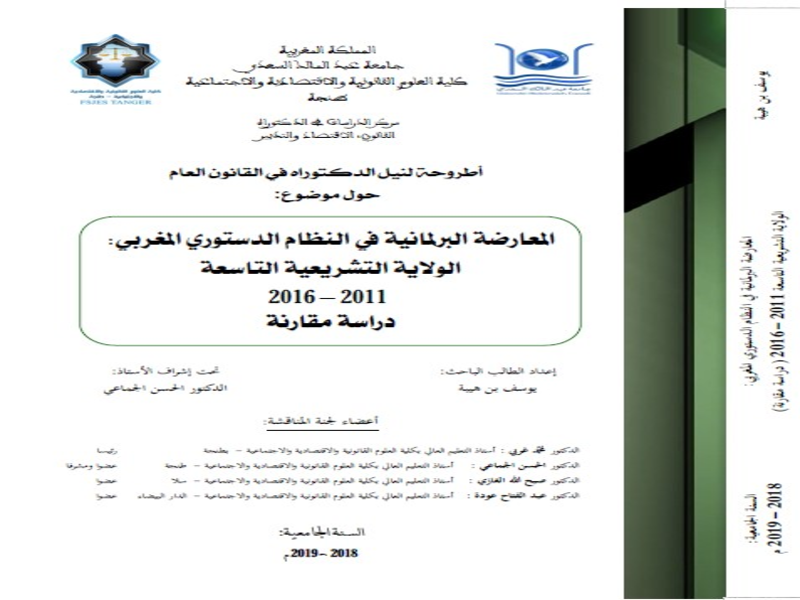 The thesis’s report on:  The parliamentary opposition issue has formed one of the most critical malfunctions in the parliament. Therefore, we tried our best to provide a research product that clarifies its position and rank in the institutional hierarchy. Along with featuring the guarantees and efficiencies that have been granted to it in the new constitutional reform to increase its effectiveness and improve the legislative institution’s outcome. Such as standing on the parliamentary opposition’s crisis, whether related to the scarcity of legislative capabilities, allows it to achieve a significant result. As for the weakness, it must be searched for its causes outside the constitutional approach.

There would be a research conclusion presentation at the end of the research to identify the role, outcome, and obstacles to the parliamentary opposition’s work during the ninth legislative mandate [2011-2016]. It has been foreseeing ways to advance its position in the future of the coming legislative states. By working on presenting a scientific material that enables the bridging of the relationship between research knowledge and parliamentary practice that would qualify the legislative institution in modernizing the Moroccan political system. It also accommodates the outputs of academic and scientific university research within the process of democratic and developmental advancement in Morocco. It is not only considering the university as a field of education separate from contributing to comprehensive and sustainable development.

Youssef bin Hiba
He obtained a doctorate in public law and political science the Faculty of Law in Tangiers, Abdelmalek Essaadi University. Researcher in constitutional law, he also interested with the issues and evoultions of political sciences. He has many articles and studies that published in acadimic magzines and reaserch centers. he participated in many scientific conference and forums in morocco.